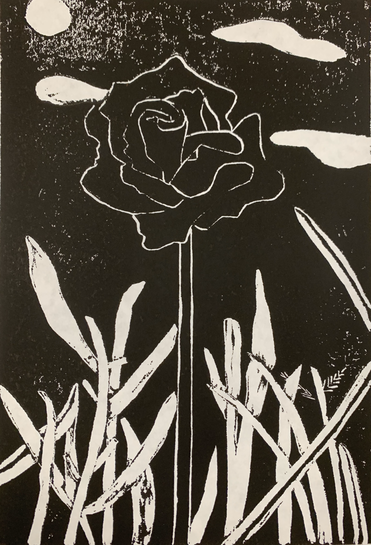 The Sub Rosa
Block Print
30cm x 23cm
September 2019
​​
Exhibition text
​ A world of secrecy is shown in this work of art and what everyone hides from others. By exaggerating the size of rose and the grass that surrounds it  has you're eyes move along the lines created having you see every part of the block print. This was influenced by Henri Rousseau and the movement symbolism.  He's know for using form,shapes,and lines to show it's symbolism. 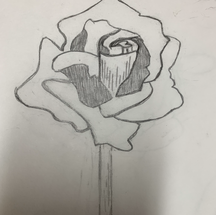 This sketch is just an idea of what I wanted the rose to look like on the block print. This the first thing drew when I start, I've added some detail to help figure out If I wanted to crave out certain parts or not. 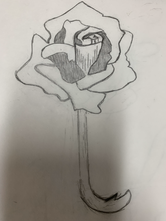 Added to my first sketch, which was just a rose but made the stem curved
into a hook like an umbrella's handle at the end  because i was thinking about the mean of what Sub Rosa meant which is "Under the rose". 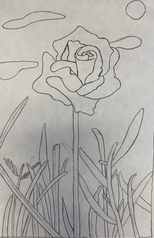 I decided to keep it as a regular rose and add grass and other plants to it. This sketch is apart of what I've started to put on my final product in addition to what I already had, like the sky and 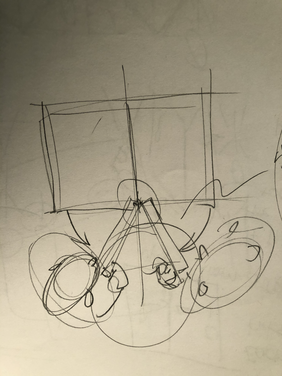 This sketches I made is the final product and my instructions on what I wanted to crave out and what to keep because it was going to be black.
Process
Experimentation 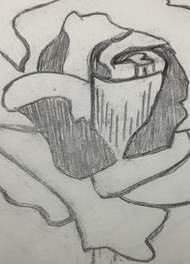 Before I started to crave, I still wanted to add details to my rose but i had no idea how i could have did it. As you can tell from the sketches I tried adding lined detail. It still wasn't work out for me, so i just decided to keep the rose the way it was and continue with my original plan and only crave out the lines of the rose. I stuck with all the other plans I had prior.
​

​ During the process of craving out of the block, I used two different craving tools throughout the journey of finishing my project. I started with the V- shaped utensil to crave out all the outlines of the drawing that transferred onto block. There were times when i would back in to those lines i craved out to make it a deeper line so it can show up on the bock print. I also used this utensil for really small areas where i needed to crave that whole space out. But it did take a little time to use and perception. The other utensil i used had a wider opening ,it looked like have an of a pipe and it took out big chunks out at a time. It helped me crave out the big areas i had making it quick to finish those parts. But there were times where i was applying a lot of pressure and force while using both of the tools. I had some moments where i almost ruined parts of my block print because when i was craving, the tool i would be using has skipped from the area to different part that i wasn't intending to get craved out. so i did have to play around with to understand what was the best way for me to maneuver the tools.
Process
After finishing my drawing of the final product and I transferred it on a blank piece of paper so it reversed the image  of what I originally made. Then i used it to transfer onto the block material, so when I crave it and print it on paper the image it will reverse again come out as what i had in the first place. Once I had the drawing on the  block  I started to used the V-shaped tool as my first option because it helps make small fine lines. That's why I use it to crave out the outlines of the objects from the image. so I could then I could use the c shaped tool to crave out big chunks away from the block because those parts are what I wanted to be complete white on the print. After i finished craving my block, I started to go through the print process. I got the water based ink and put about half a spoon full of it on the the metal plate. I then used the brayer to roll out the ink on the plate until it was smooth and rolled the brayer onto my craved out block until it was complete cover with the ink evenly . I put the paper on the on top of the block and use a baren  to transfer the ink onto the paper, I peeled the paper off slowly and put it on the rack to dry.

As my first time doing a block print, i believe i did good. It really didn't know to expect while doing this project, it was definitely new experience for me. But after seeing the final project i think i tackled the task at hand. i did struggle with adding detail had no idea on what would look good  because It would have made my block print better if i added more detail, significantly to the rose because it looks basic. i feel like i was  able to adapted to problems i had ran into, which was the printing. Every time i printed it came out different and took some time.
I also had difficulties with what my whole project was going to be about in the beginning. I had to start up my brain by looking at some pictures of block prints on google and that helped me a lot. what also helped me was my art teacher's website from art history that helped me make connections with my artwork.
​

1. Clearly explain and describe how you are able to identify the cause -effect relationships between your inspiration and its effect upon your artwork.
​     I wanted the main part of my to be about the rose . So I’m made the made it bigger than everything else on my artwork like the sun and clouds. Like how Henry Rousseau did the plants covering the animals, in the real world the animals at bigger than the plants. So how the plants were hiding the animals and people, i made the rose big and somewhat hide on the work.
2. what is the overall approach (point of view) the author (from your research) has regarding the topic of your inspiration?
​       It helped show how I was going to present it my theme on the block print .
3. what kind of generalizations and conclusions have you discovered about people, ideas, cultures, etc. while researched your inspiration?
That different cultures and people have different meanings for what secrecy mean to them, everyone has their own version.
4. what was the central idea or theme around your inspirational research?
My central idea or theme was to be physiological level that everyone that everyone has experienced before.
5. what kind of inferences(conclusions reached on the basis of evidence and reasoning) did you make while reading your research ?
That theirs different ways people interpret secrecy because I seen different meanings when I was researching about it.
​